Replica of the Stampe Vertongen SV-4b, a Belgian aircraft designed in the 1930s, the Stampe SV4-RS is a modern ultralight version (also designed in Belgium), made possible by the purchase of the original plans of the aircraft.

1/1 scale copy of the original, the SV4-RS ultralight version displays the same flying qualities as its predecessor, of which more than a thousand were produced and used from 1937 to 1970.

Today, ULM Baisy-Thy offers you the opportunity to fly this mythical biplane, which nevertheless meets the German airworthiness standards for ultralight aircraft of the LFT-UL the most stringent in Europe.
As an example, the SV4-RS supports loads of +6G/-3G without permanent deformation.
It is of course equipped with an airframe parachute (the whole aircraft descends under a parachute in case of a big problem).

The Stampe is a tandem aircraft. As such, the passenger is in the front seat and the pilot in the back seat.
The wings being placed far forward, the people on board enjoy an unequalled visibility in a biplane, which further enhances the pleasure of flying in a historic aircraft with extraordinarily smooth and homogeneous controls.

Of course, the cockpit is not closed, but the windshield is very effective and protects effectively from the cold.

The plane has a classic landing gear, i.e. equipped with a tail wheel (not a nose wheel), and gives a glimpse of the rolling charm of the aircraft of that era.

Don't hesitate any longer, treat yourself to a flight in this mythical aircraft!
Visit our eshop here. 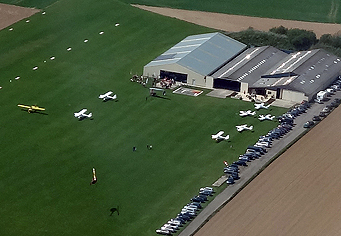